About the Daughters of Wisdom

Oblate Sisters of Wisdom … who are they? 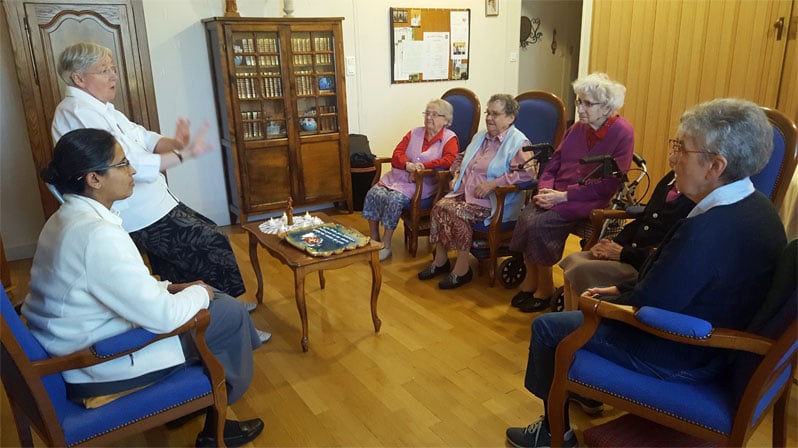 At the heart of the magnificent film: “Marie Heurtin” is the discreet story of the Sisters of Our Lady of the Seven Sorrows, which is hardly mentioned in the book “Souls in prison”.

I therefore want to pay homage to this branch of the Congregation of the Daughters of Wisdom, founded in 1859, which played an important role in the mission of the Larnay Institution.

In fact, Mr de Larnay, a priest known for his piety and missionary courage, one day, worries about the spiritual future of these girls who are hard of hearing or deaf,  those girls who grew up humanly and spiritually in Larnay. Perhaps some of these carry, in them, the desire to devote themselves entirely to the Lord!

During his various steps to realize his dream, Mr de Larnay faces many difficulties. He then turns to the Daughters of Wisdom and decides to entrust to them this particular Institute and to attach it to their government. The candidates will follow a formation adapted to their condition and will make vows that will be renewed each year … Since 1859, this beautiful project has grown. During many years, we could meet the new Sisters, serving in several institutions for the deaf run by the Daughters of Wisdom in France. One of them was even sent on mission to Haiti …

Since its founding more than a century and a half ago, 89 deaf sisters have served their sisters andbrothers with disabilities, by sharing in their suffering and by transmitting their knowledge …

In 1909, this branch of the Congregation of the Daughters of Wisdom became the Institute of the Oblates Sisters of Wisdom. Today there are only 6 oblate sisters.

The Congregational Leader of the Daughters of Wisdom always remains the Superior General of the Oblates Sisters of Wisdom.