News
You are here : Home / History : The founding acts of the Congregation

History : The founding acts of the Congregation

The Archives of the Vendée invite you to discover in a few chapters, episodes marking the history, the organization and the actions of our Congregation. Discover CHAPTER I. “From birth to official recognition: the founding acts of the Congregation”.

Sister Agathange relates, at the beginning of the first volume of the chronicles of the Congregation, the way in which the young Marie-Louise Trichet, barely 17 years of age, decided in 1702 to follow the lead of Louis-Marie Grignion de Montfort, who was at that time chaplain of the general hospital of Poitiers.

It is from the meeting of these two personalities that the congregation of the Daughters of Wisdom was born, dedicated to the care of the poor and the sick and to the education of children.

In 1703, Marie-Louise put on the humble habit of coarse ash-grey cloth desired by Louis-Marie Grignion de Montfort and took the name of Sister Marie-Louise de Jésus. 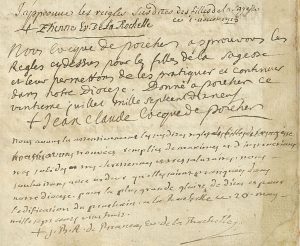 Primitive Rule of the Daughters of Wisdom ( FDLS E 4)

For 10 years, she worked alone with the poor of the hospital in Poitiers before being joined in 1713 by Catherine Brunet, Sister of the Conception.

In 1715, Father de Montfort brought the two sisters to La Rochelle in order to instruct poor children there, according to the wishes of Bishop de Champflour, the bishop of the city.

The Congregation is founded.

Sister Marie-Louise de Jésus thought of establishing the nascent Congregation in Saint-Laurent-sur-Sèvre near the tomb of Louis-Marie Grignion de Montfort.

The inhabitants of the city gathered in assembly on September 24, then on November 26, 1719, accepted the establishment in which the Daughters of Wisdom “propose by an effect of their pure good will without any commitment or constraint to instruct the young girls of this said parish, to relieve the poor who might be found there” (FDLS 1 F 1).

In 1720, Sister Marie-Louise de Jésus took possession of a small dwelling called the “long house” put at her disposal by Madame de Bouillé, benefactor of the work. The foundations of the Mother House were laid, and the Congregation was able to gradually develop and extend its influence.

1773 : Civil recognition of the Congregation 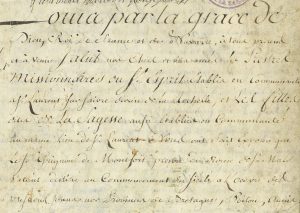 As early as the 1730s, the superiors of the Montfortian congregations wished to obtain official recognition of the institutes founded by Louis-Marie Grignion de Montfort by the granting of letters patent. After several unsuccessful attempts, it was in March 1773 that Louis XV granted the famous letters which approved and confirmed the two establishments formed at Saint-Laurent-sur-Sèvre “of a community of secular priests under the title of Missionary Priests of the Holy Spirit [and] of a Community of Daughters under the title of Hospitaller Daughters of Wisdom.